Liverpool’s hopes of completing a quadruple have been strengthened after the Reds beat Manchester City to book their place in the final of the FA Cup. 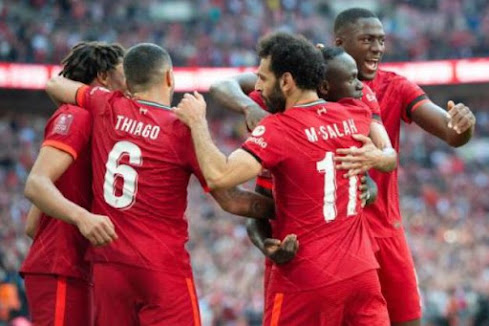 Jurgen Klopp's men stunned their rivals as they took a 3-0 lead inside the opening 45 minutes.

Manchester City improved in the second-half and scored two goals, but the Citizens ultimately failed to complete what would have been a memorable comeback at Wembley.

The result sees Liverpool enter their first FA Cup final in a decade, but more importantly, it maintains the team's quadruple hopes.

Looking back on the performance, Klopp told the BBC: "I am absolutely proud. It's incredible, I think the first half was one of the best we ever played. We did all the right stuff, I loved every second of it.

"Second half started with a goal from Man City and then the game opens up. The quality of City is insane.

"We had counter-attacks which we didn't use and we can close the game there. It's so difficult to win against them, but because we have my boys in the dressing room we have a chance."

Liverpool have already won the League Cup this season following a penalty shoot-out victory over Chelsea at Wembley.

The Reds are now through to their second cup final of the season and are also making good progress in the Premier League and the Champions League.

While many are daring to talk about a potential quadruple-winning season, the Liverpool boss is certainly not getting carried away.

When asked about the impact of the semi-final win, Klopp added: "It's not a statement. We just wanted to go to the final and that's what happened."

Liverpool's successes mean they face a congested schedule in the final weeks of the campaign. When asked about a fixture pile-up, the German said: "We will get another game in midweek because they have to move another one.

"I'm not sure if we have a full week before the last matchday. It's all difficult, but who cares? We knew about these problems, but we wanted to go to the final and to beat the best football team in the world is a pretty special moment."

Next up for the Reds is another huge match as they welcome Manchester United to Anfield in the Premier League on Tuesday.