Over five years ago I was based in the Middle East and one weekend I decided to head to Bahrain for a beer, a passport stamp and, of course come football. It helped there was a young Indonesian coach who was working there at the time so I reached out to Rudy Eka Priyambada on line and we arranged to meet at the Sherlock Holmes, a popular watering hole on the island. Rudy's story fascinated me and many others and his journey into coaching can be found here.

I've followed his career off and on over the subsequent years and have been intrigued as he develops a little known piece of real estate in the shadow of Mount Muria into a footballing hotbed.

With the help of local business people, Rudy developed his own academy, a popular go-to option for football people in Indonesia where the industry is notorious for its short career span. While I understood the logic behind this decision I always hoped Rudy's determination and experiences would not be lost to the professional game so I was delighted to hear Pati took over the license of Liga 2 side Putra Sinar Giri, formerly based in Gresik, East Java. 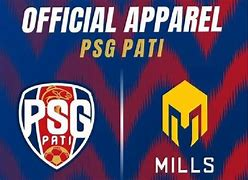 The new owners have moved quickly to rebrand PSG as Putra Safin Group Pati (PSG Pati) partly to recognise one of the driving forces behind the develop of football in Pati but also of course to tap into the local football community. The Parisian PSG influence though is evident through a similar colour scheme in the branding but any attempts to winning over local fans will face other challenges beyond aping a well known foreign club.

For starters there is already a Pati based local side. Persipa have a history going back 70 years which makes them quite old  by Indonesian standards and a fan group known as Patifosi. Will Persipa survive the arrival of a new, better funded club? Will Patifosi switch allegiance?

Indonesian fan groups know from experience how transient football clubs can be. Pasoepati, in the football daft city of Solo, started life following Arseto and were quick to embrace the short lived Solo Ksatria in the rebel LPI in 2011. Many elder Jakmania broke their terrace cherry cheering Pelita Jaya. For so long it is the supporters who have been the forgotten people as clubs over the years happily swap cities at the drop of a hat so you cannot blame them for tie their affections to a shiny new club that looks and smells like a football club rather than follow a club that may or may not even compete in the league, depending on the whims or ambitions of local leaders. How many Bali United fans, for example, followed Persigi or how many Madura United supporters went to Perseba games on a regular basis?

As I wrote in 2019, Indonesian football has long needed a period of consolidation where older, more established football clubs which have long been poorly run are replaced by newer, more ambitious folks ready to embrace ideas from the 1990 like club shops and sponsors. Will PSG Pati be the latest to join the list of ambitious, privately owned clubs?

In some respects PSG Pati will be going down the trail blazed by the mega rich Johor Darul Ta'zim with their investment in youth and infrastructure. It's too early to well whether the club will be looking to snap up expensive players like JDT but with a smart football 'ecosystem' being put in place by Rudy and his team perhaps they won't need to. They have all the facilities to entice promising young players to head for Central Java and offer them a clearly laid out career path under the guiding hand  of a man who is happy to place his trust in youth.

With other leagues already into their 2021 seasons or soon to start them the foot dragging Indonesian league still has no idea whether it will finish the 2020 season,, restart as the 2020/21 season or just start afresh with 2021. With such apathy and lethargy in the corridors of power we are still a long way from knowing what a PSG Pati will look like when they finally take the field but off the field the club are putting the right building blocks into place for a rosy future!