This here blog is now in its 15th year and in that time there have been some quite seismic changes to the Indonesian football landscape. The years of plenty for example when we had two parallel leagues to the suspension by FIFA are enough to fill a book as well as this here blog but another change has occured that may be less dramatic but in the long term could prove to be way more beneficial to the game.

Politics is never far from the back pages and when I started Jakarta Casual nearly every club in the top flight owed its existence to politics and a club's success or failure ultimately depended on how invested local politicians were in football and how much of local taxpayers' money they were willing to splurge on their local team and local state owned enterprises were 'encouraged' to sponsor their local club.

I have written at length previously about the consolidation that has been happening as private money has moved into the game and taken over moribund clubs (Persisam - Bali United, Pelita Jaya - Madura United, Persikubar - Bhayangkara Solo and so on) but we now have a new player on the scene and, if handled correctly, could provide a far bigger football revolution than any narrow minded political adventure.

Bali United have gone out of their way to develop themselves as a football club. They look and feel like a traditional football club with all that entails. Bhayangkara also do a lot of good things. They have a good mix of youth and experience, they play football the right way but they will never be seen as anything other than the club of the police force and will struggle to attract a mainstream fanbase because of that link.

The football traditionalist in me was sad to see Cilegon United all but erased from the landscape. I always enjoyed my trips down the Tangerang - Merak toll road to see the Volcano play at their quirky Krakatau Stadium and they always seemed to boast a decent support. They are no more now though after being bought by an entertainment company. For now they have been rebranded RANS Cilegon but don't be surprised if that changes; their logo, club colours and home base already have!

The whole celebrity thing is massive in Indonesia. People become famous pretty much for being famous, for looking sad on sickly soap operas or singing soppy love songs to screaming fans. And they have alot of fans. Barcelona for example have almost 97 million followers worldwide on Instagram. Raffi Ahmad and Nagita Slavina, the RANS behind the new look Cilegon club, have nearly 53 million followers on  Instagram - and most of them will be in Indonesia alone! 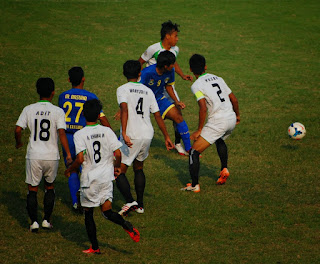 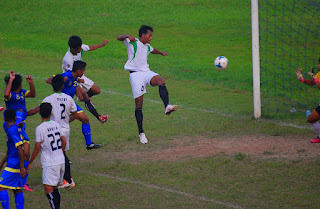 The new owners have brought in the experienced Bambang Nurdiansyah to coach their team of 'galacticos' with former international M Nasuha, pictured above scoring for Cilegon United, as his assistant. On the pitch they have signed Cristian Gonzales, Hamka Hamzah, Patrich Wanggai and Asri Akbar as well as brought Tarik El Janaby and Syamsir Alam back in the game.

For now they are making all the right noises but will anyone want to go and see them? Will they be able to convert their massive following into football supporters? It is one thing for teenagers to goofily wave their arms in the air to tear-jerking ballads in an air-conditioned TV studio but are they likely to make the move from a comfy sofa to a humid terrace? And does is it even matter? RANS Cilegon have announced a pre-season friendly against Arema early in January and fans will be able to watch the game live on YouTube for rp20,000!

There is no denying entertainment groups such as RANS can bring a lot to football, hopefully dragging the game into the late 20th century, but hopefully they remember that football is not a TV show, football's soul, and especially Indonesian football's soul, is found on the terraces across the country and where ever RANS Cilegon make their home home they set about building and developing a fanbase and, just as importantly, sticking by their supporters