I grew up an Arsenal fan. In fact I can�t remember a time when I wasn�t an Arsenal fan, except for a few hours in the 1970s when we let slip a two goal lead against Derby County and I loudly told my mates who I was having a kick around with in the local park, the nearest we had to social media at the time, that I was so disgusted I wanted them to know I now supported Sunderland.

I started going to home games in the early 70s then, as I got a paper round and then a job in the local record shop, ventured further afield following the Arsenal. And when I went to Australia I 1987 I was convinced I�d be gone for 12 months and would return to my spot on the Clock End terrace.

It didn�t happen that way of course and in the early 90s I fronted up in Thailand hoping to broaden my mind as an English teacher. Between Australia and Thailand I�d been in Germany watching the likes of 1FC Koln, Bayer Leverkusen and Bayern Munchen when I could. I wouldn�t say I was a football snob, I was also happy going to see non-league games in England or National Soccer League games in Australia, but I didn�t really take much notice of football in my new home.

I was dimly aware the national team were playing in the Asian Games and saw enough to be impressed by the likes of Tawan and Kiatisuk and occasionally I would have a look round the Thai Farmers Bank store in Siam Square thinking I would like to get a souvenir and catch a game but every time I read the in depth football columns in the Bangkok Post, and they were superbly written, while sat in the teacher�s room on Saturdays I could never see the attraction of leaving a bar for long enough to traipse across Bangkok to see SET v PAT, BBC v RTAF or TTM v KTB.

So instead I joined the library at the British Council and in those dark days between my money running out and pay day I would sit in my dimly lit room off Rama 4 and read about people like Chidchobs, Kuenplums and Sila�parchas. Little did I know but this background reading became essential to understanding local football.

When I saw the name Chonburi popping up in the Post on Saturdays I immediately thought of the Kuenpluem family, one of whom I used to teach TOEFL primarily because nobody else fancied 7am starts. The second thing that struck me hell, was Thai football moving beyond a bunch of SOEs and government departments based in Bangkok before returning to more important matters like Bobby�s Arms, Cosmos, My Other Office, Country Road and Thermae. The 90s were something that happened to other people.

I started Jakarta Casual in 2006, primarily as a way to keep me on the straight and narrow after getting married but it soon snowballed and within a few years I was covering Indonesian, Malaysian and Singaporean football. It was only a matter of time before I added Thai football to the blog. With teams like Muang Thong United, Bangkok Glass and Chonburi it was beginning to resemble a proper league and thanks to the message board there were other loonies just as football daft as I was and just as interested in the local burgeoning scene.

So, 2009 and the holidays. �I�m going to Bangkok for a few days to see some football,� I told my wife. Yeah, right I could see her thinking. Bangkok, football, that�s a new one!

I holed up in my old manor and took a taxi out to Ekkamai before boarding a bus to Sri Racha where I was going to meet Dale. The plan was I wanted to experience a Thai style awayday so we met up, had a few beer before joining a supporters club bus to take us�into Bangkok. In fact, to a ground a mile and a half away from where I was staying!

The ride from Sri Racha to Klong Toey took about 10 minutes as me and Dale discussed Thai football, English football and punk rock. I�d only see Oldham play a handful of times but it turned out Dale was at each of the games I went to including a Friday night game at Brighton and my last ever game at Highbury, a League Cup tie in 1994. We also had both seen a game between Thailand v South Korea in 1997, we both popped out Thai football cherry that night.

As awaydays went it was pretty lame, especially if I were to compare with similar trips I�d made in Indonesia but 2009 was the year Thailand discovered football so there was little in the way of history or rivalry to hang your hat on.

But it was a fun day out. Chonburi won 2-1 and I bought a Thai Port in the club shop and even got to chat with Kosin, the Chonburi keeper who had spent a period of time on loan with Persib in Indonesia. I asked him what he thought of Persija and he spat on the floor. Brilliant thinks I, the Persib fans will love this when I post it on You Tube. Unfortunately, I�d forgotten to press record on the handycam!

After the game I took the 47 bus back to my hotel. The next day I went to see Chula United v Pattaya United and, um, to be honest it was crap. A few drunken foreigners had turned their backs on their favourite beer bar for a trip to the Big Durian but they produced little in the way of atmosphere, they were too busy either trying to not spill their beer or snoring. 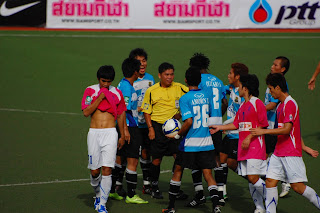 I was interested enough though by the first game to return later in the year when Muang Thong United hosted Chonburi. A large crowd was expected so me and Dale and his missus entered the ground some four hours before kick off and tried to make ourselves comfy on the stone steps. Good atmosphere, good game, I was tempted enough to return a number of time over the following years to catch games but for me the novelty soon wore off and looking back I can see a few reasons why my interest waned.

First, the Chidchobs got involved. While the Kuenpluems didn�t seem interested in throwing money at the game, Chidchobs were people who didn�t lose be it politically or elsewhere. Then the Sila�parchas got involved in Suphanburi, or as I used to call in in the 90s Banharnburi, and football was rapidly becoming a playground for phu yai and their egos. I couldn�t see how the domestic league could develop with only one team winning the league every year, who was going to support a provincial club with no history and no hope of winning the title? The early boom years weren�t sustained and attendances soon levelled off as Thais discovered a new �latest craze.�

I would still book trips to Thailand but increasingly I wasn�t even bothering with the games. I went to see Bangkok United and Army United and wondered why I was bothering spending all that time and money. Yes, I know people like to say the Thai league is the best in the region but I�m not even sure what that means. Undoubtedly they have some of the best players and some of the best role models and their marketing used to be second to none but the quality was spread very thinly.

Thai football is obviously in a much better place than it was when I first read those superbly written Bangkok Post articles a quarter of a century earlier and one of the reasons for that is the early success of Chonburi in pushing the game beyond government departments and reaching out to local communities. Part of me still thinks it would be fun to go back and zigzag across the country catching games in distant provincial towns and cities, riding local non air conditioned buses, waiting in dusty markets for them to fill up, sitting next to old buggers stinking of Sangthip as they gently caress their crowing cock. As a footballing experience the Thai game is a long way behind its Indonesian brethren but as an appendage to an all encompassing Thai experience it can�t be beaten!