In these dreadful times it is heartening that at least a pretense of a normal life is going on in football. I speak of course of the draws made yesterday for the AFC Champions League and the AFC Cup. It seems mad that just 12 months ago I was able to book flights to the best region in the world and go to Jalan Besar Stadium to catch AFC Cup ties when now I'm being discouraged from catching a train to Nottingham, just a 30 minute ride away!

How little we knew then, how naive we were as I took in ties between Tampies Rovers and Bali United followed by Hougang United v Ho Chi Minh City. Two top games! 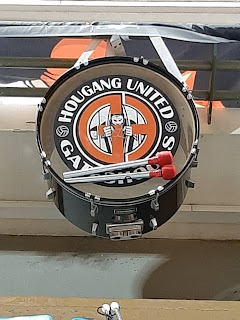 The competition of course would  be cancelled because of the pandemic while the Champions League would be held later in the year in Qatar. Undoubtedly, the Champions League is the AFC's diamond, the competition that brings together the best teams in Asia to do battle for the ultimate trophy but for me it lacks the eclectic appeal of the AFC Cup. I can't get too excited at the prospect of watching Al Nasr v Al Ittihad for example but the prospect of seeing Boueng Ket v Geylang International has me salivating over Skyscanner.com and dusting off my passport!

The AFC Cup is due to start in April, and fingers crossed it does, so as being a football fan is all about dreams, let us dream!

There are a number of play offs to be negotiated before the group stage starts and what better way to begin a competition than with two ties like these in the South Asia section:

The winner of the first tie gets to meet Bengaluru while Abhani Limited Dhaka await the winner of the second tie and how cool is it that Bangladesh could have a couple of teams in the AFC Cup?

Moving to ASEAN and a few weeks later their play offs begin with a couple of times:

Some  new names there including Cambodia's Visakha who have an Irishman, Colum Curtis, on their coaching staff and boast a Canadian international, Marcus Haber, in their ranks. Haber has previously lined up for St Johnstone, Stevenage, Notts County, Crewe, Dundee and Falkirk as well as numerous Canadian teams and is still only 32! It's mad, innit? Here we are in the middle of a pandemic yet this lad is happy to uproot himself from Canada to Cambodia to kick a ball around!

The winners of those ties face tricky opposition in the next round with Visakha potentially facing Persipura in May. Lao Toyota or Kasuka will face Hanthawady United.

The group stage, no dates have been set yet, will look something like this:

Wow! Boueng Ket v Bali United, that would be the first game on the list while I would be severely tempted by Basundhara Kings v Mohun Bagan as well!

I'm not going to go down the tired, cliched route of a group of death, last time I checked each group will have two teams knocked out, but there are some intriguing match ups to be had.

Singapore's Lion City Sailors will be emulating the incredibly daftly named United City in competing in Asian club competition in only their second season and they will come up against a Kedah side which will have a familiar name in the dug out...Aidil Sharin was part of the successful Home United side coached by Steve Darby in the early years of the 20th century and moved to Malaysia at the end of 2018 which means by my calculations he has survived two seasons at the same club which ain't bad, is it? Helping the team win the Malaysia Cup in 2019 would have helped of course!

In Group I Terengganu have invested smartly during the preseason, taking advantage of the stasis in Indonesia to hoover up Makan Konate and David da Silva as well as bringing in Australian Chris Herd who boasts Aston Villa on his resume as well as teams in Thailand, India and Bangladesh in recent years.

After finishing third in the Super League last season, Terenggau set about trying to improve on that talented squad and that included not renewing the foreign players. Their ambition is to be rewarded. They are never going to be able to compete domestically with Johor Darul Ta'zim but that hasnt stopped the club backing its coaching staff to have an impact elsewhere and it will be interesting to see how the Turtles get on both domestically and internationally.

Yep, for me the AFC Cup is the place to be. Here's looking forward to a thrilling competition!